A lifetime’s journey to Ban Gioc, one of Southeast Asia’s largest waterfalls 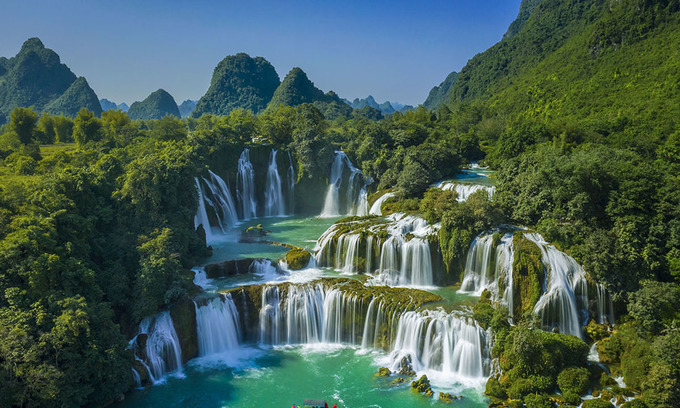 Some love waterfalls for their mighty, echoing lion’s roar. I adore them for their soft, poetic, and dreamy lure, as encompassed by Ban Gioc.

I arrived in Cao Bang Province towards late afternoon in April when the sun shone its last rays of the day upon the faraway mountain peaks.

As the sky darkened, I finally set foot in Trung Khanh District of the northern province, where famous Ban Gioc Waterfalls nestle in Northern Vietnam.

Ban Gioc is considered Vietnam’s most beautiful waterfalls, one of the largest natural waterfalls in Southeast Asia, and also the fourth largest in the world amongst those located on an international border (after Iguazu Falls located between Brazil and Argentina, Victoria Falls between Zambia and Zimbabwe, and Niagara Falls between Canada and the U.S).

At 7 p.m, I arrived at Yen Nhi Homestay, a traditional Tay ethnic abode near Ban Gioc Falls. In the evening after a hearty dinner filled with regional specialties like local vegetables, Chinese lap Cheong sausage, junglefowl, and wild boar, I drifted into a deep, pleasant sleep after a long enervating day outside.

My first morning in Cao Bang, the land of amazing landscapes, proved extremely refreshing. Before embarking on my Ban Gioc adventure, I enjoyed special steamed rice paper rolls (banh cuon) prepared by Diep, owner of the homestay. From here, I traveled for three km before arriving at the falls.

At the site, I first purchased an entry ticket for VND45,000 ($2). Beside the entrance stood a lineup of local souvenirs like natural stone jewelry, traditional H’mong, Dao, and Tay ethnic costumes, silver coins, and recipes for Tay herbal medicines.

Past the display of souvenirs stood rows upon rows of paddy fields cultivated by the Tay community. Since rice was not in season, the fields lay empty, carved out by streams pouring from Ban Gioc Falls. The site encompassing the waterfalls had been cleanly and spaciously zoned off. Tay riders often bring their horses here, providing photos opts for VND20,000 ($0.9) a pop.

The best part about the smaller waterfall is that visitors can walk directly to its bottom and wholly capture the majestic natural landscape. The waterfall features a stone dam built by the management board. When approaching the waterfall one can witness sun rays seep through layers of vapor. These rays of light create a rainbow effect that renders the experience even more whimsical.

In addition, the cerulean water entices the eyes of travelers, including myself, and makes one want to jump in and cool down. However, to ensure visitor safety and preserve the state of Ban Gioc, dipping in the plunge pool is banned. If this rule is violated, the perpetrator is asked to leave the site and has to pay a penalty.

I crossed the bridge to reach the larger waterfall, which is 50 m wide and 35 m high. From the border milestone, an unobstructed view of the main waterfall graced my eyes.

Another must-try activity when visiting Ban Gioc Falls is renting a raft and cruising alongside the larger waterfall. For only VND50,000 ($2.2) per person, the raft brings one closer to the foot of the waterfall for a wholesome experience.

As I neared the glittering cascade, I marveled at how the currents swiftly flowed and splashed in every direction. Once again, those piercing rays of rainbow light harmonized with the landscape and painted a magnificent visual. Small rafts carrying Chinese travelers passed by and we waved at one another, expressing our mutual affection.

After a morning of visual enchantment, I left the arresting Ban Gioc Falls and traveled another 700 m to Phat Tich Pagoda, a sanctuary of Buddhist relics and a nationally renowned cultural site. After parking my bike, I quickly scaled the threshold.

The architectural style of this pagoda closely resembled those I had previously visited. The pagoda stood still yet authoritatively amongst towering mountains, so tall from here I saw both ends of Ban Gioc Falls. Like a romantic and pretty land found inside a fairy tale, Chinese mountains and little houses beyond the border appeared before me. The bell sounds resonating throughout the pagoda premises gave a graceful, soft touch to the landscape.

At noon, I ended my Ban Gioc adventure to head back to Nguom Ngao Cave, the most famous limestone grotto in Cao Bang and an unforgettable attraction for many tourists.

In Tay dialect, Nguom Ngao Cave translates to Tiger Cave. According to locals, the name was associated with the feisty and menacing tigers that once lived inside, whose growls and roars rumbled and frightened villagers.

Another paranormal activity related to the unstoppable flow of water from the cave that once flooded Khuoi Ky Village. An old story among the locals has it that the flood carried on until a shaman was urgently invited to perform a ceremony. It was only after the spiritual ceremony that the leak halted and village life returned to normal.

Nguom Ngao Cave impressively measures 2,144 m in length and consists of a variety of stalactites and stalagmites. Many beautiful sections like the “Four Heavenly Pillars” with its sky-high rock formations and sparkly surfaces help form the cave. However, the most extraordinary is perhaps the “Golden Lotus” area that features a rock in the shape of a golden lotus chandelier.

It is best to visit the cave during the rainy season (late May-late July) when droplets gather on stalactites and create an indescribable visual harmony. The rain can also cause the ground to become more slippery than usual and tourists are advised to be careful around deep pits inside.

Another travel destination one cannot miss when visiting Cao Bang is Khuoi Ky Village, conveniently located next to Nguom Ngao Cave. After exploring the cave, I headed back towards Yen Nhi Homestay in search of the intriguing community.

Khuoi Ky is a Tay ethnic village of 14 stilt houses spread across 10,000 square meters. Its uniqueness lies in the fact that all stilt houses, walls, fences, and barns are made of rock. Stilt houses collectively lean against the mountain and face Khuoi Ky Stream.

What first caught my attention was the sound of a dan tinh, a traditional stringed instrument, and Tay women singing. This was one of the highlights during my trip to Cao Bang.

On another memorable day, I guided a French couple I had previously befriended and gotten close with on a trekking trip across villages in Dam Thuy Commune. From Khuoi Ky Village, there are two possible trekking paths: one through Bong Son Village to Nguom Ngao Cave and the other through Nung Niec Village to Ban Gioc Falls. Both routes measure three kilometers. Together we passed by cornfields, hills, and villages over 200 years old.

My new friends were more than ecstatic to learn about the area surrounding Ban Gioc Falls. Whilst a trek can be a memorable and engaging activity, travelers must make sure to have a skilled and knowledgeable guide as many small paths make it easy to get lost.

On my last day at Ban Gioc Falls, I returned to Cao Bang Town to do more exploration. Once I reached Ma Phuc Pass, I headed towards Tra Linh Township in Cao Bang to visit Thung Mountain.

Thung Mountain, which translates into a ‘holed’ mountain, features a hole in the middle of its peak. The hole almost resembles an eye and measures 50 meters in diameter. The site exudes an air of liberation, upliftment, and contentment that one cannot put into words.

Under the golden sunshine of the mountainous area, I took deep intakes of pure and refreshing air and contemplated the verdant fields that stretched for kilometers with horses chewing grass, and listened to the crashing wave of neighboring Nam Tra Waterfall.

Locals told me during the flood season (late May-late July), water from Nam Tra Fall inundates the fields, creating a lake for kayaking. This activity is also very popular amongst visitors.

The harmonious landscape of Thung Mountain wrapped up my Cao Bang journey and left me with much sadness and emotions.

*Transportation: From Hanoi to Cao Bang, one can choose to rent a motorbike or buy a limousine bus ticket.

Motorbike: Since Cao Bang is tucked away in the northeast mountains, renting a motorbike is an ideal option for adventurous travelers who want to enjoy the ride. They can capture the landscape, stop whenever needed, and explore the land more freely.

*Accommodation: Khuoi Ky Village has a variety of locally-owned homestays. Personally, I chose Yen Nhi Homestay because of its enthusiastic and friendly owner. The stilt house made of rock is over 200 years old and includes different room options. Aside from the scrumptious meals at the homestay, your experience will elevate tenfold with the beautiful sound of the owner Diep’s singing and string instrumentation. Contact number: 0942 241 760.

*Food: At the homestay, you will have the opportunity to enjoy Tay specialties like local vegetables, lap Cheong sausage, wild boar, smoked meat, sour pho, and steamed rice rolls.

*Ideal travel time: The best time to visit Cao Bang is from the end of July up to October. This is when the waterfall looks the bluest and clearest whilst the ripe paddy fields add warmth to the landscape. November to April is also an ideal period to visit Ban Gioc Falls. The only time to avoid is from May to June during which the falls get flooded and the water turns murky, stripping the site of its beauty. In return, the rainy season brings out the best of Nguom Ngao Cave.

*Duration: You will need at least four days and three nights for a worthwhile trip to the area. However, you are more than welcome to extend your trip like I did to explore more.

*Weather: The local winter in the northeastern region typically lasts from December to February and is harsher and colder than normal. Adequate clothing is well-recommended during this time. The other months are hotter in Cao Bang as opposed to its northwest counterparts.

Me Pia Pass, a cascading 14-story slope along the 4A national route, connecting Xuan Truong Commune to the center of Bao Lac District of Cao Bang Province, is a must-visit for adventurous travelers or avid photographers.

*Souvenirs: Trung Khanh chestnuts are a specialty from mountainous Cao Bang. The chestnuts are fresh, fragrant, and delicious but expensive since there is only one harvest each year. Other specialties that would make great gifts are traditional herbal medicines for stronger tendons and bones. Easy Riders Vietnam is a group of licensed tour guides and motorcyclists who have a passion for riding and sharing our riding experience. We feel it is our obligation to you to provide exciting tours that will open you to discover and learn as much as possible about what Vietnam has to offer, within whatever timeframe you have to spend. Each member of our company brings to the table a unique and valuable skill set. When you get in touch with Easy Riders Vietnam, you know you’re in safe hands and you’ll have an unforgettable experience in Vietnam.